A compilation of 10 interesting facts about planet Mars, which will shed light on the most amazing facets of this planet.

A compilation of 10 interesting facts about planet Mars, which will shed light on the most amazing facets of this planet.

If any planet has always been an object of fascination for mankind, other than our own planet that is, it is planet Mars. The fourth of the eight planets of the Solar System, Mars recently came into limelight owing to the discovery of water on it―albeit in a solid state. Even though it is in solidified state, the mere fact that water is present on Mars is nothing short of an amazing discovery.

Did you know that Mars is home to the largest volcano and the largest canyon in the Solar System? And when we say largest, you need to note that they are a lot larger than their largest counterparts on the Earth. Given below are more of such interesting facts which will provide you the details about some less-known attributes of this planet.

1. The Olympus Mons on Mars is the largest volcano in the Solar System. With a height of 16.7 miles from the surface of the planet, it is almost thrice as tall as Mount Everest.
2. The Valles Marineris―the largest canyon in the Solar System, is also located on Mars. It is estimated to be 2490 miles long, 125 miles wide, and 4 miles deep.

3. The study of atmospheric composition of Mars reveals that it is made up of 95 percent carbon dioxide, 3 percent nitrogen, and 1.5 percent argon, along with trace amounts of water.
4. Among the two moons of Mars, the Phobos orbits very close to the planet. Scientists believe that this natural satellite will be pulled in by the gravitational pull of the planet and dismantled to pieces. These pieces will eventually orbit around the planet and form a ring around it.
5. Planet Mars orbits the Sun at a speed of 14.5 miles per second, which is significantly slow compared to Earth which orbits the Sun at the speed of 18.5 miles per second.

6. Mars is only half the size of Earth and has mere one-third of Earth’s gravity. Simply put, you can jump thrice as higher on planet Mars as you would on Earth.
7. The reddish-orange appearance of planet Mars is attributed to the presence of ferrous oxide (what we call the rust) on the surface of the planet.
8. As a part of NASA’s robotic mission, Mars Exploration Rover, two unmanned rovers named Spirit and Opportunity have been sent to Mars as of today.

9. National Aeronautics and Space Administration’s (NASA) Mars programs have revealed that there exist two polar ice caps on the planet, Planum Boreum and Planum Australe.
10. Of all the Mars missions commissioned by space agencies two-thirds have ended in a failure, and this has earned the planet the nickname Bermuda Triangle of the Solar System.

Even though the facts given above are quite amazing in themselves, they are a bit too complex for kids to understand. What kids need is a simplified version of these facts, which they can grasp with ease and have fun while going through them; that’s exactly what we have here.

4. When calculated in terms of Earth, a single day on planet Mars is 24.6 hours long, while a single year is equivalent to 686.98 days on Earth.
5. When viewed from Earth, Mars has a bright reddish-orange appearance.
6. This planet is named after the ancient Roman god of war, owing to its reddish appearance which resembles the color of blood.
7. The physical features of Mars, which include plains, canyons, volcanoes, and craters, resemble that of planet Earth by a significant extent.

8. While our planet has one Moon, planet Mars has two: Deimos and Phobos.
9. The average temperature of planet Mars is -80°F (-60°C), which is quite cold as compared to the average temperature of our planet at 57°F (14°C).
10. Recent Mars explorations have revealed that the planet has water, however, it found in the form of ice.
By now you must have realized how amazing this planet is. Having said that, scientists are of the opinion that there is a lot more to know about it. As we make progress in the field of astronomy, many new facets of Mars will surface one by one. 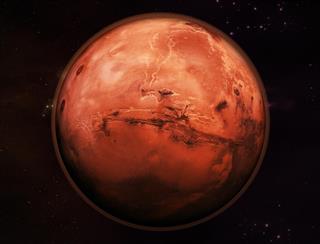 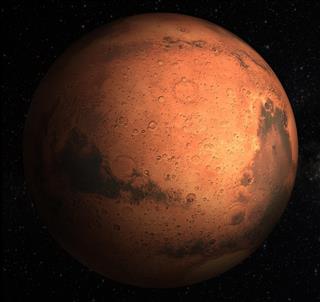