The largest volcano in the universe doesn't exist on planet Earth, but on Mars. It's known as Olympus Mons, and through the facts presented further, we reveal the true nature of this monstrous shield volcano towering over the red planet's surface. 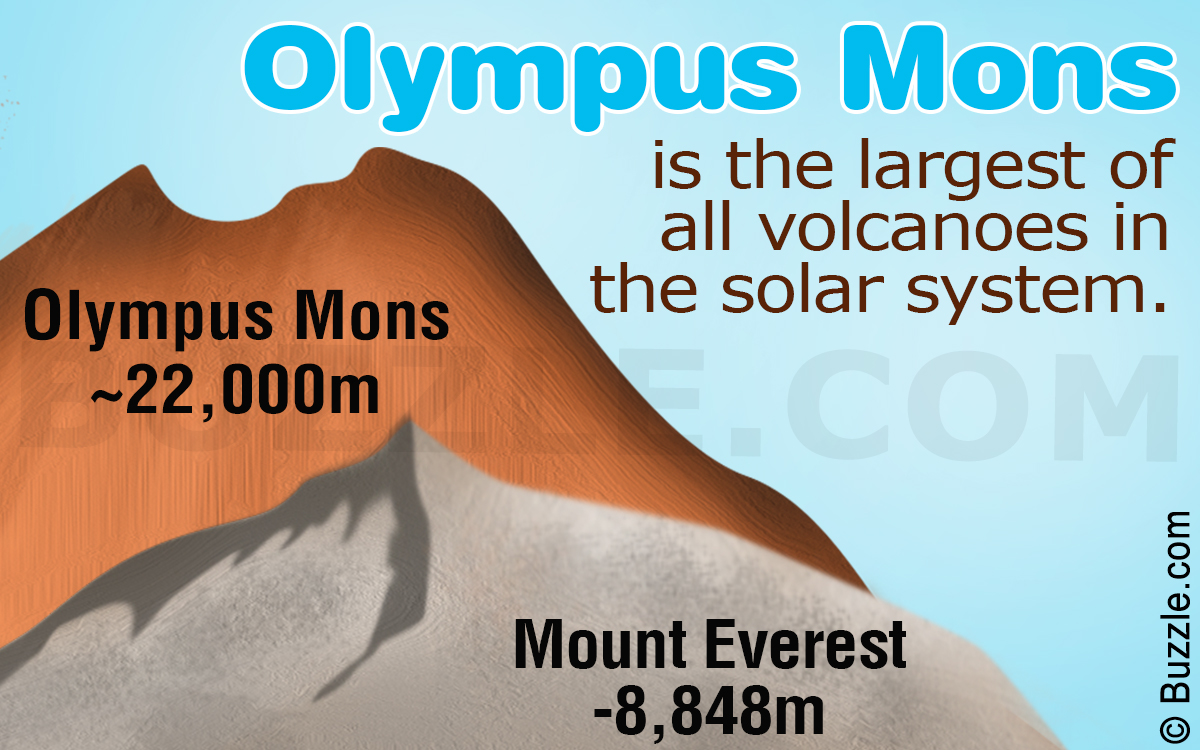 The largest volcano in the universe doesn’t exist on planet Earth, but on Mars. It’s known as Olympus Mons, and through the facts presented further, we reveal the true nature of this monstrous shield volcano towering over the red planet’s surface.

Why Martian Mountains are Tall

The low gravity on Mars (approximately one-third of Earth’s gravitational pull), a sluggishly moving surface crust, and a high degree of historical volcanic activity are three of the prime reasons why the planet’s mountains are several times higher, compared to their terrestrial counterparts.

As our probes land on terrestrial worlds like Mars, our Earth-centric view of the solar system is gradually breaking down. Situated about 227.9 million kilometers away from the Sun, Mars is much more of a kin to our planet, compared to the gaseous giants like Jupiter. Ergo, its geographical features are similar to Earth. One of the most enigmatic features on its surface is the towering Olympus Mons (Latin for Mount Olympus), the second-tallest mountain and largest known volcano in the solar system.

Surface gravity of Mars being lower compared to our planet, and its plate tectonics being different, the planet’s geographical features, including its mountains, have a magnanimity and grandeur which dwarfs our planet’s surface features. Let us take a tour of this towering colossus―Olympus Mons―and know all about its size, structure, formation, and discovery.

Volcanoes are formed when the hot molten lava, ash, and gases trapped inside the Earth’s surface find an outlet, through a fissure or opening in a planet’s crust. The resulting deposition and solidifying of magma creates a mountain over time. Shield volcanoes (named so because their entire structure resembles a warrior’s shield) are almost entirely made up of cooled lava flows piling over time, and they tend to be flatter compared to other types. Olympus Mons is one such shield volcano on Mars, formed through tectonic phenomena that are similar to Earth. All Martian volcanoes are up to 100 times larger than those found on our planet.

► Olympus Mons is known to be about 22 km or 14 miles high, making it the tallest mountain on the red planet, as well as the second-tallest mountain and largest volcano in the solar system. Various measurements place the actual height to be in the range of 22 km to 26 km. Its peak is known to be 21,229 m or 69,649 ft high.

► The entire expanse of the mountain’s structure is known to stretch for 600 km or 370 miles. It covers a total area of 295,254 km2 or 113,998 sq. mi. If uprooted and placed on Earth, it would cover the entire state of Arizona or a large part of France (as depicted in the graphic below). In fact, with its size, it could easily engulf the entire region that makes the Hawaiian islands.

► As depicted in the actual photograph presented below, the mountain is located in the western hemisphere of Mars, off the north-western boundary of what is known as the Tharsis region, a volcanic plateau, which is home to three other shield volcanoes known as Ascraeus Mons (15 km high), Pavonis Mons (14 km high), and Arsia Mons (16 km high). While the western part of the volcanic mountain lies in what is known as the Amazonis quadrangle, the central and eastern parts are close to the Tharsis region.

► In terms of height, it is about twice the altitude of Mauna Kea (whose height is about 6.3 miles or 10 km) and thrice that of Mount Everest (whose height is 8.848 km or 5.5 miles). This should give you an idea about the magnanimity of the entire geological structure. A pictorial comparison is presented below.

► By height, at 22 km or 14 miles, it is known to be the second-tallest mountain in the solar system, dwarfed only by the central peak of a crater named Rheasilvia on the minor planet Vesta.

► The mountain is the youngest shield volcano, that formed during what is known as the Amazonian period of Martian geological history, which began 3 billion years ago. It was aperiod marked by low meteoric activity and high volcanic activity. In terms of structure, it is similar to the volcanic mountains that together form the land area of the Hawaiian islands.

► The mountain’s peak has six collapsed craters (calderas) and a cliff on a side (towering 8 km or 5 miles high), which is a unique feature among the Martian volcanoes.

► The volcano has a gentle slope, that has been measured to be around 2° to 5°.

► Surrounding the volcano is a 2 km deep moat, that has probably been created by the weight of the mountain, exerted on the surface.

► The largest volcano in the solar system, Olympus Mons was formed and has been growing since the last 3 billion years, through the lava outflow from a hotspot. These hotspots are volcanic fissures or openings near the tectonic plate boundaries that provide an outlet to underlying high-temperature magma.

► On the Earth’s surface, the crust or tectonic plate floating over the hotspot moves over it. This causes the deposition of lava over different regions over a period of time, which leads to the formation of serial volcanic mountains like the Hawaiian islands.

► However, in case of Olympus Mons, Martian tectonic plates being extremely sluggish in their movement, the lava flow has been steadily accumulating over the same region on the surface for millions of years, to create the extraordinarily large mountain. Steadily deposited layers of basaltic lava flow have been depositing and solidifying over millions of years to raise the mountain to its existing altitude.

► The entire structure of the mountain is built by solidified basaltic lava flow and channels. One of the reasons for the large spread of all volcanic mountains on the Martian surface is the low planetary gravity, coupled with a high rate and force of eruptions.

► Since the 19th century, Olympus Mons has been known as a distinguished surface feature named as Nix Olympica (Latin for Olympic Snow), named so due to its reflective features. Its location was identified by Giovanni Virginio Schiaparelli, an Italian astronomer of the time, using an 8-inch (22 centimeter) telescope.

► Its actual discovery and identification as a volcanic mountain was made by the Mariner 9 spacecraft, launched by NASA and the Jet Propulsion Laboratory, that reached the planet on November 14, 1971, amidst a global dust storm that engulfed the planet. As the dust began to settle and the surface features began to show up, some of the first structures photographed by the spacecraft were the volcanic mountains.

The Moon and Mars are the next colonization destinations for humans. Some day, our descendants might actually visit Olympus Mons for a hike and look upon a new world that’s been made habitable through terraformation. When our planetary neighborhood has so many surprises and enigmatic structures, one can’t help but wonder what the extrasolar planets might have in store for us!