Facts about the Aquila Constellation You May not Know

Aquila is one of the several constellations visible in the northern sky. Take a look at some interesting facts about the constellation.

Home / Uncategorized / Facts about the Aquila Constellation You May not Know

Aquila is one of the several constellations visible in the northern sky. Take a look at some interesting facts about the constellation.

Two ships of the United States Navy, USS Aquila (AK-47) and USS Aquila (PHM-4), have been named after the constellation.

The name Aquila stands for eagle in Latin; it represents the bird who carried the thunderbolts of Zeus in Greek mythology. The constellation is positioned just a few degrees north of the celestial equator and can be best seen at latitudes between +90 degrees and -75 degrees. The ideal time to see this constellation is at 21:00 or 9:00 PM in the month of August.

Refer below for a brief outline of the constellation, and some interesting facts about it.

Facts about the Aquila Constellation 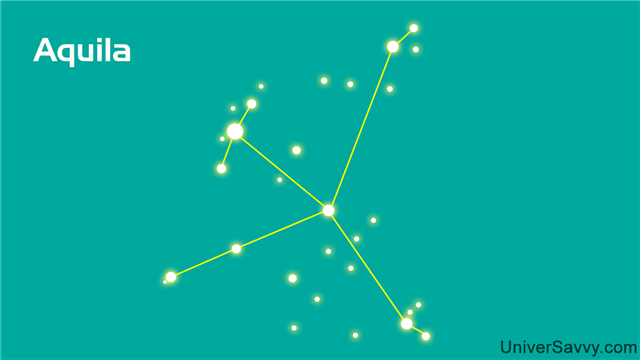 Aquila is a diamond-shaped constellation significant for the three stars in a row, the brightest being Altair or (Alpha Aquilae), and the other two being Beta and Gamma Aquilae respectively. The tail is formed by a duo referred to as Deneb el Okab or Zeta Aquilae. 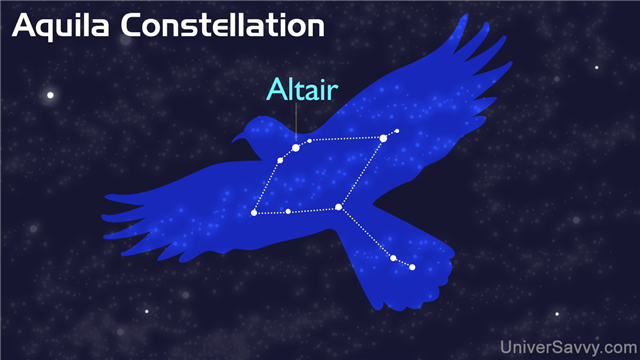 The Aquila constellation is looked at quite differently in several cultures. The Romans perceived it as a vulture, the Indians believe it to be the half-man, half-eagle god ‘Garuda’. Greek mythology considers it to be the eagle which was sent to carry Ganymede.

As per the Chinese tale Qi Xi, Altair has been forever separated from his wife, Vega by the milky way due to Vega’s punishment of marrying a mortal.

Altair is also one of the three bright stars that forms the ‘summer triangle’. The other two stars, Deneb and Vega belong to the Cygnus and Lyra constellation respectively.

Altair is the constellation’s brightest star and has a luminosity which is eight times more than the sun.

Aquila’s other name ‘Vultur volans’ simply refers to ‘flying vulture’, and was coined by the Romans.

Ptolemy, the popular Grecko-Egyptian astronomer from the 2nd century described 48 different constellations, one of which is Aquila.

Aquila is also known to hold some gigantic, extragalactic objects. One of these is as huge as 10 billion light years and is known as the Hercules-Corona Borealis Great Wall (Her-CrB GW), it was discovered in November 2013 and is the most massive structure in the universe known to humans.

NASA’s Pioneer G, a space probe launched in April 6, 1973 to study the asteroid belt will pass one of the stars in Aquila constellation in approximately 4 million years.

There are three interesting planetary nebulae that reside in this constellation. The NGC 6804 looks like a small bright ring, the NGC 6751 looks like and is also referred to as a ‘glowing eye’, and the NGC 6781 has a stark resemblance to the Owl nebula in the Ursa Major constellation.