Why Does Jupiter Shine so Bright in the Night Sky?

Home / Uncategorized / Why Does Jupiter Shine so Bright in the Night Sky?

Take a look at the night sky and you are likely to catch a glimpse of an incredibly bright circular structure that outshines the rest of the stars.  Though few know it, this object is the planet Jupiter.  Jupiter is the “giant” of the sky, measuring a whopping 11 times the size of our planet.  If you own a telescope or binoculars, use them on a cloudless night to zoom in on Jupiter and you will be quite awestruck by the planet’s brightness and beauty.

A Look at Jupiter

Jupiter has an incredible 79 moons, giving it the most powerful gravitational force of any planet within the solar system.  Jupiter even has rings similar to those of Saturn.  Though Jupiter is undoubtedly gigantic, NASA scientists believe it began its life as a mere ice asteroid and subsequently migrated to its current position.

In fact, computer simulations show Jupiter formed about four times farther from the sun than its current position in 2020.  Though NASA has not yet visited Jupiter, its space probe dubbed Lucy will embark on a dozen-year mission to the planet at some point in 2021.

The Best Time to see Jupiter in the Night Sky

Jupiter’s next opposition is in mid-July.  Opposition is a science term that means the point in time when Earth is between the sun and the planet or other object in question.  Opposition occurs once per year.  However, the massive planet is often visible throughout June, July and beyond.  What matters most is whether there are clouds in the sky.  Even the presence of light pollution can make it challenging to see Jupiter and other stars, especially in urban areas.

Take a look at the southeastern portion of the sky around dusk and you just might spot Jupiter shining bright as the night sky darkens.  Those positioned near a body of water such as a lake or ocean might even spot the planet’s bright light reflecting off the water.  True science geeks will partake in a star party or public observatory to enjoy a full view of the giant planet’s enormous pink-hued cloud bands.

If the night sky is clear and you are located in an area with minimal pollution, you might even be able to see the planet’s famous great red spot with a powerful telescope.  Such a telescope might even provide a look at the planet’s moons that shine quite bright.  Jupiter’s most luminous moons are as follows:

Jupiter’s incredible brightness is also attributable to its relative closeness to our planet as compared to other objects and stars in space.  The planet’s light-hued clouds’ highly reflective albedo also contribute to its brightness.  So don’t be shocked the next time you look up at the sky on a cloudless night and spot an incredibly bright object – it is not a comet, asteroid or UFO – it is the beautiful planet Jupiter shining bright for everyone to see. 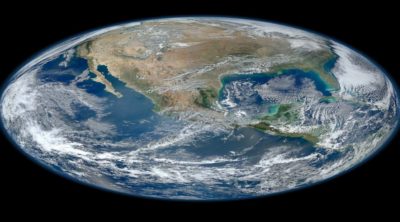 What are the Chances Earth Will be hit by an Asteroid?